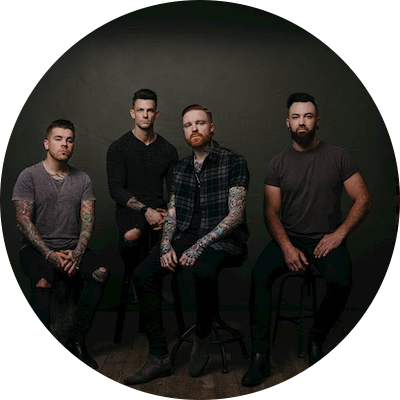 Memphis May Fire makes anthems for the broken. The four-piece rock band channel a generation’s worth of angst, frustration, and pain, with a focused blend of gigantic melodic hooks and crushing aggression. Even after topping Billboard’s Hard Music Albums chart and breaking into radio’s Active Rock Top 20, Memphis May Fire refuses to sacrifice who they are or the people who made them. In fact, Remade in Misery, their seventh full-length album, is the heaviest Memphis May Fire record yet.

Memphis May Fire confronts crippling anxiety, violence, disrespect, polarization, substance abuse, and overzealous self-righteousness all over Remade in Misery, strengthened by a foundation of hope and renewal at the heart of the lyrics. Tracks like “Bleed Me Dry,” “Death Inside,” “Only Human,” and “The Fight Within” evoke the cathartic bombast of the band’s best-known songs, a return to their roots with the seasoned polish earned through years of touring and making music together.

A new season unfolds for the band, filled with revitalization and renewal. Having worked with A-list producers, cowriters, and in multiple studios to deliver 2018’s eclectic breakthrough, Broken, the band looked backward to move forward. Stripping things down to their core elements, hearkening back to the basement band days when they created the songs their fans cherish the most, Memphis May Fire rekindled the spark within to build a blazing inferno of riffs and inspirational words.

“I couldn’t be prouder of this album,” frontman Matty Mullins declares. “We have melodic songs, with a sense of maturity to them, without sacrificing the energy that we still want to have live.”

It is the first Memphis May Fire album to be both produced and mixed by Kellen McGregor, the band’s guitarist who co-founded the group roughly 15 years ago. The longtime rhythm section of bassist Cory Elder and drummer Jake Garland inject the songs with infinite depth and focus. Cameron Mizell, who coproduced 2014 fan-favorite Unconditional with McGregor, produced Matty’s vocals.

Mullins enlisted his friend Cody Quistad, guitarist and clean vocalist for the band Wage War, during part of the writing process. Fire From The Gods singer AJ Channer guests on “Only Human.” At the heart of any collaboration is the Memphis May Fire mission: to connect with the brokenhearted.

“As a band, we’ve always aimed to create songs that make people feel understood and less alone when they hear them,” Mullins explains. “Because that’s what music did for me. Growing up, I had all of this fear, rage, love, and panic. And with the current state of the world, everyone seems to be in conflict with each other, so convinced of their positions. ‘Where do I stand in any of this? How can I learn to be myself and grow as a person without feeling confused and always under attack?’”

“We want people to have songs they can sit down and listen to, or play in the gym, or driving in their car, and know the world is bigger than it seems,” he continues. “To know they exist in a world with other people that understand that it is okay to be imperfect. That someone else knows your hurt.”

Memphis May Fire functions as a sonic confessional, in opposition to the dark brokenness engulfing so many in the modern age, an idea stretching back to the band’s first full-length album, 2009’s Sleepwalking. Songs like “Miles Away,” “No Ordinary Love,” “Beneath the Skin,” “Vices,” “Stay the Course,” and “Carry On” account for 100 million views on YouTube and millions of on-demand audio streams. It’s a testament to the energized connectivity between the band and their audience.

The guys are family to the million-plus fans who follow Memphis May Fire on social media, revered by the people who discovered their early albums in 2009 and 2011; those who made Challenger (2012) the biggest selling debut in the history of Rise Records at the time; and everyone who championed their music since. Unconditional debuted at Number One on Billboard’s Rock, Independent, and Hard Music charts. In 2016, This Light I Hold made inroads into radio while rooted in heaviness. Boasting the singles “The Old Me,” “Live Another Day,” and “Heavy is the Weight,” Broken was a distillation of what the band does creatively, with the group’s signature passion and fearless genre-bending.

Remade in Misery is the sum total of all that’s come before with a forceful charge into the future. “We wanted to resurrect the rawness, lyrically and musically, that gave us our start as a band,” says Matty. “While maintaining the momentum we achieved with building a bigger audience on recent records.”

In an effort to connect with as large and diverse an audience as possible while maintaining a level of connectivity and intimacy, Memphis May Fire has toured with a vast list of important rock and metal acts that includes Killswitch Engage, Sleeping With Sirens, Black Veil Brides, Sevendust, and Atreyu.

A staple defining act in the heavy music and screamo subculture that’s been so meaningful for so many, Memphis May Fire co-headlined tours with platinum screamo band Yellowcard and The Devil Wears Prada and took groups like Silverstein as support. They appeared regularly on Vans Warped Tour, headlined the Take Action! Tour and earned spots at major rock radio festivals like Rock on the Range and heavier leaning international events like Download, Slam Dunk, and Heavy Montreal.

“No matter what walk of life you’re from, 2020 took a toll on everybody,” Matty says. “I think there’s never been a more important time for aggressive music; songs people can use to release emotions, whether they are feeling abandonment, or struggling with addiction, or otherwise at an all-time low.”

The unity of purpose is palpable at a Memphis May Fire show, as both the audience and band share their life experiences, dreams, and fears, through the power of transcendent music. As important as it is to see the light at the end of the tunnel, there is a great strength to be gained from a sobering, stark look at how it feels to be in the throes of adversity. Memphis May Fire crafts the sound of hope from struggle, delivered by a dedicated group of men who aspire to something more with their art.

Matty Mullins of Memphis May Fire

Matty Mullins is the lead singer of iconic metalcore band Memphis May Fire, fronting the band with his alternating clean and scre…