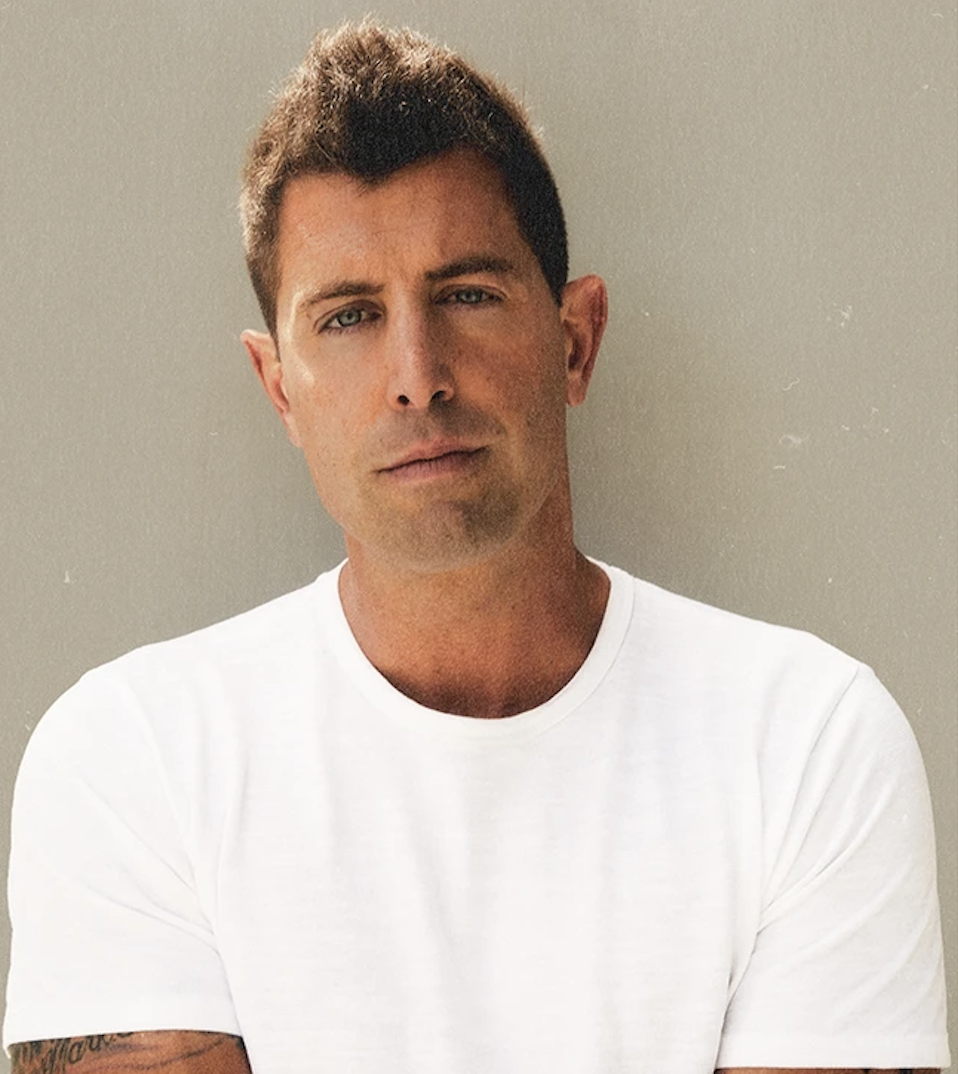 As a young boy growing up in small-town Lafayette, Indiana, Jeremy’s impressionable young heart watched his parents model this behavior on a regular basis. It was not uncommon for Jeremy to accompany his father to a local prison or boys’ home to minister through words and music, and when his father started a church when Jeremy was only 14, his eyes were truly opened to the remarkable impact of pastoring and ministering. Between caring and providing for him and his siblings and his father entering full-time ministry, the importance of caring for and loving well the people put in your path was not lost on the blue-eyed boy with an affinity for music.

But like any other adolescent who grew up in the church and acquired the pastor’s kid label, Jeremy faced his own doubts, temptations and rebellion. As a teen, he found himself living a double life—partying and drinking behind his parents’ back and showing up with his halo seemingly intact on Sunday mornings. But at 16 years old, listening to a pastor at youth camp, Jeremy heard God say to him, “I want to use you, but you’re on the edge of a cliff. You’re about ready to jump off. You need to run as far away from the cliff as possible.”

That day a switch flipped and Jeremy submitted his life to the Lord. When he left home for bible college two years later, he was ready for the road that lay ahead.

After Jeremy graduated bible college and while leading worship at a bible study on campus, he spotted her—a beautiful woman with her hands raised toward heaven. Jeremy was captivated by Melissa, totally lost in worship and oblivious to the world around her. Their relationship began as a flirtatious friendship but their connection was clear—undeniably magnetic. Caught in somewhat of a love triangle between Jeremy and the friend who introduced them, Melissa abruptly ended the two’s budding relationship. Jeremy’s heart was broken.

But when he got word that Melissa had cancer, Jeremy dropped everything and immediately drove to be by her side. After a God-ordained hospital proposal, chemo treatments during their engagement and a huge joyful wedding once she entered remission, the cancer returned.

As his wife battled cancer, Jeremy continued performing for audiences in Southern California, sharing their testimony and asking and believing for a miracle. When Melissa lost her battle in 2001, Jeremy completely lost his desire to continue making music. After meeting with a pastor who had endured much suffering of his own, Jeremy was encouraged to keep going amidst his grief and pain. Melissa’s immense and unwavering faith that her battle with cancer and ultimate death would be worth it if even only one person came to know the Lord also propelled Jeremy to continue sharing his testimony after her passing.

Jeremy was determined to keep sharing God’s faithfulness through his greatest trial, and the Lord continued to use his words and lyrics to minister, touching thousands of lives in
attendance.

In 2002, Jeremy released his first nationally distributed album, Stay. While touring to promote the album, Jeremy crossed paths with The Benjamin Gate singer Adrienne Liesching. The two got to know each other on tour, hit it off, and were married in 2003. They have since been blessed with three children, Bella, Arie, and Egan. In 2003, both a critical and commercial success, six songs from Stay reached the top of the Christian singles chart, and the first song he wrote after Melissa’s death, “I Still Believe”, went to #1.

Between 2002 and 2017, Jeremy released 11 albums, four of them RIAA- certified as Gold. He has sold nearly 5 million albums. His original music, a mixture of ballads and up-tempo rock songs, has earned him numerous awards and nominations across the Christian and secular music industries, including five GMA Dove Awards, one Grammy nomination, three American Music Award nominations, and four ASCAP Songwriter of the Year Awards. His 2017 album, I Will Follow, debuted at #1 on the Billboard Top Christian Album and in the top 25 on Billboard Top 200. In 2010, Camp was named Billboard’s #2 Christian artist of the decade. In 2013, Tyndale House

In early 2018, following a hard year of watching someone close to them walk through addiction, talks about turning Melissa’s story into a major motion picture with the Erwin Brothers progressed, and Jeremy began experiencing sudden and debilitating panic attacks. The trust and fear issues he faced after Melissa passed away had resurfaced, and the enemy was attacking Jeremy with everything he had.

Walking through a hopeless fog of panic, dark depression and debilitating anxiety for about a week, with the constant companionship of and prayers from his wife Adrienne, Jeremy finally heard from the Lord: “You can trust me. Perfect love casts out fear. I love you perfectly...I want

you to be free of this. I want you to know that I love you so much and that you can trust me.”

For the next six months, Jeremy spent time with the Lord, relearning and experiencing the breadth and depth of his love and surrendering the things he discovered had been holding on to. In the midst of that process, God started downloading songs into Jeremy’s heart. And Jeremy started writing—determined to be completely open and honest about his feelings and what he was learning in this hard season.

The result? Nearly 20 years after recording his first album, Jeremy is set to release what he is calling his most vulnerable, authentic music yet—The Story’s Not Over (Sept. 20, 2019). Featuring 11 songs and a new, energizing sound, the album is a reflection on one of the hardest years in Jeremy’s life; the valley he walked through, how the Lord spoke to him and carried him through it, and what’s to come in this season of newfound clarity, life and ministry—one marked by absolute surrender.

Songs like “Dead Man Walking,” the first album single released in May 2019, “Still Alive” and “Keep Me in the Moment” feature honest, soul-bearing lyrics thanking the Lord for rescuing him from the darkness, for reminders of life when he didn’t feel alive, and for showing him what matters in the midst of his trials

Every track on the album is undeniably marked by transparency, vulnerability, surrender and complete honesty.

With The Story’s Not Over releasing six months prior to the Erwin Brothers’ biopic I STILL BELIEVE, and a marriage book written with Adrienne releasing in 2020, Jeremy is thankful to be entering a new season of ministry on the other side of the valley, one where he feels the Lord is going to minister through him and his story like never before.

I STILL BELIEVE, which chronicles Camp’s personal story of love, loss and faith, is being produced by the Erwin Brothers’ (I CAN ONLY IMAGINE), newly formed studio, Kingdom, in association with Lionsgate, and is scheduled for a nationwide theatrical release in March 2020. The movie features K.J. Apa as Jeremy, Britt Robertson as Melissa, Gary Sinese as Tom Camp, and Shania Twain as Teri Camp.

The gifts of new music, a movie and a marriage book all come on the other side of a year of tremendous hardship, pain and growth; they are the fruits of learning to really trust the Lord again, crying out to him in the midst of a dark place. Jeremy’s desire in sharing his journey—not sparing any detail or hiding any unpleasantry—is to be a minister of the gospel in its entirety. He wants his listeners to know that he goes through hardships like everybody else does. The same God that’s loved and rescued him time and again, will—and wants—to do the same for them.

On September 10th, 2021, Jeremy Camp follows up hit single “When You Speak” with a new album by the same name. When You Speak is available now.

Camp leads the Christian solo artists with 41 No. 1 singles over his storied career, Jeremy Camp’s new album When You Speak is set to release September 10. This album follows the chart-topping success of his most recent project, The Story’s Not Over, which yielded three No. 1 radio hits — “Dead Man Walking,” “Keep Me In the Moment” and “Out of My Hands.”

“This album is the culmination of what God revealed to me during this last season,” says Jeremy Camp. “These songs are straight from my heart and I can’t wait for everyone to hear them.”

His first single from the new record soared to the top twenty within the first two weeks of release. The music video for “When You Speak” premiered exclusively on Facebook and gained 7.5 million views in less than a week.

ABOUT JEREMY CAMP: Throughout his 18-year career, Capitol CMG artist Jeremy Camp has established himself with landmark accolades including:

Over 5M lifetime albums sold and has crossed a billion streams across streaming services
Holds title for most No. 1 singles among solo artists on the Christian Airplay chart
Billboard’s #2 artist of the Decade in 2010
41 No. 1 radio hits across all formats
5 RIAA Gold Albums
1 GRAMMY® nomination, 3 American Music Award nominations, 5 Dove Awards and 4 ASCAP “Songwriter of the Year” Awards