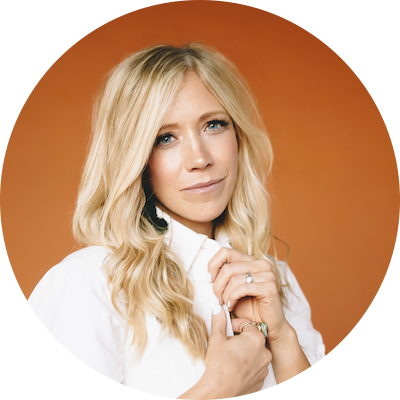 There’s a story etched into the walls of the Grand Canyon. It’s a story of one disaster after another. Layer upon layer of landslides, mudslides, volcanos, droughts and floods. Yet, at the bottom of that valley, the Colorado River snakes its way through the dry and dusty rocks flowing with a current of running water. Singer/songwriter Ellie Holcomb found herself camping on the banks of that river, captivated by her vast surroundings. In the wake of COVID-19, rising racial tension, and deep division across the country and around the world, Holcomb marveled at how this canyon felt like a picture of many people’s hearts in this crazy hard and chaotic season. Lying on her back at the base of that canyon a mile deep into the surface of the earth, it hit her: “We all know what it’s like to have our hearts break and split wide open like a canyon, but there in the middle of our deepest pit of sorrow, there’s a river running through, a current of God’s love ever-present, ever-flowing, ever-ready to carry us through our darkest nights and our deepest ache.” And all at once, her new album, C A N Y O N, was born.

C A N Y O N serves as Holcomb’s third full-length solo project—and her first in partnership with major label Capitol Christian Music Group—but the mother of three is already a seasoned artist. She recorded and toured full-time with her husband’s band, Drew Holcomb and The Neighbors, for eight years before stepping off the road when her first child was born. Her solo debut, As Sure As The Sun (2014), landed her a Top 10 hit at Christian radio with “The Broken Beautiful” and a GMA Dove Award for “New Artist of the Year.” Her critically-acclaimed sophomore LP, Red Sea Road, followed in 2017. In subsequent years, Holcomb has released two children’s books—each with a companion EP of original music written specifically for kids, the second of which earned her a Dove Award for “Children’s Album of the Year” in 2020. She’s consistently writing, touring and performing while raising three kids with Drew in her hometown of Nashville, Tennessee. (They’ve been dancing in the kitchen to the new songs on C A N Y O N, and she can’t wait to share them with the world.)

Her latest musical endeavor might have been birthed in a valley of natural beauty in Arizona, but the songs were forged in the depths of pain back home in Nashville. Over the course of the last few years, Holcomb took an intentional journey, marked by counseling and deep reflection. As she was willing to lean into the most painful places in her story, she encountered the empathy, kindness and tenderness of God in a palpable way. Experiencing the presence and the nearness of God in her most wounded places changed everything for her.

So when an EF-4 tornado tore through Holcomb’s Nashville neighborhood causing massive destruction, a global pandemic shut down the world, and the continued prejudice and racism in the country exposed our humanity on a new level, she grieved deeply. As she walked through the ancient ruins of her own story, and in the story of this country, her heart cracked wide open. But into that broken-open space, the love of God flooded in, like that life-giving water in the Colorado River.

Holcomb wanted to write a soundtrack to this healing journey and to the beautiful discovery that God’s love runs deeper than our greatest pain and division. “C A N Y O N is a record about an enduring love that holds us, even when we are falling apart,” she shares. “There’s a current of love that will carry us when we can’t carry on any longer.”

That transformative night camping on the banks of the Colorado, perhaps in the darkest place she’d ever been, void of any ambient light, she realized the stars appeared to be shining more brightly than ever before. It was an expansive picture of the hope she discovered in deep valleys of personal and global grief. She couldn’t shake it.

“Constellations,” the first track released from the album, proved to be a fitting introduction to the poetic lyricism and imagery-rich themes woven throughout C A N Y O N’s dozen tracks. Meanwhile, Holcomb’s raw vocal on “Constellations”—recorded in one take—previewed a new facet of her voice she hadn’t unearthed prior to C A N Y O N. “I think in some ways, that song opened up a new place vocally for me,” she reflects. “I sang in a different way on this record than I’ve ever sung before, and I wrote differently. I think part of that came from experiencing a deeper level of healing personally. I accessed a deeper level of my voice that I didn’t even really know was there.”

Sonically, C A N Y O N feels different—wilder, lighter, freer. It’s also the most pop-centric record of Holcomb’s career—an intentional leap she took with Cooley to see if she could craft an album that mirrored the thoughtful pop she was currently listening to at the time—everything from Maggie Rogers to Adele and Tori Kelly. From the first stacked vocals of celebratory opening track, “I Don’t Want To Miss It,” to the affirmative echoes of the title-cut, C A N Y O N radiates Holcomb’s joy with every note. She says the songs on this album make her want to run—fast.

“This new sonic landscape feels reflective of my new global perspective,” Holcomb offers. “I feel like my eyes have been opened, and I’m beginning to lean into a broader spectrum of what Gospel living means.”

Nowhere is Holcomb’s newfound definition of Gospel living more apparent than on “Bridge,” a song about racial reconciliation born out of a community of diverse friends, who met on a regular basis this past year to study Latasha Morrison’s Be The Bridge, in an attempt to better understand one another. “We as God’s people are called to be bridge builders. There is an invitation to be a part of rebuilding ancient ruins, and I don’t want to miss out on how He has displayed Himself in the African-American story. We have been missing out, and it is our loss,” Holcomb asserts. “I want to invite others into this work, because as I’ve done this work, it’s helped me see that the Gospel is wider, higher, longer, more colorful, more beautiful, and more powerful than I ever anticipated.”

Other tracks on C A N Y O N are evidence of the heart work Holcomb put in prior to writing these songs. “Paradox” reaffirms the common thread running through the record, highlighting the upside-down way of the Kingdom of heaven here on earth. Elsewhere, Holcomb turns her heart toward home on offerings like “Mine,” a dreamy lullaby for her kids, which she sings with Drew; and “Gold,” a tender tribute to her father’s story, featuring harmonies from her four siblings. Holcomb also writes her mom’s experience of hearing about God’s love for the first time as a seventh grader into the bridge of “Color,” a song that paints everyday life in anything but black and white. “I hope it helps people open their eyes to the presence and beauty of God that surrounds us in both our most ordinary and mundane moments and in our most broken moments,” Holcomb says of the rainbow-hued selection.

Although many songs on C A N Y O N explore the presence of God in the valley, there are also songs that boast of the redemption found on the mountaintop. The spirited “Brand New Day”celebrates the hope found in the rising sun. “‘Brand New Day’ is a song about the beauty of new mercies every morning,” Holcomb shares. “We all fall down. We all make mistakes, but in those moments, we are met by the overwhelming grace of God, and I believe the true power and beauty in our stories come in the aftermath of completely wiping out.”

Holcomb addresses that moment when the walls feel like they’re caving in on “Sweet Ever After,” a duet with NEEDTOBREATHE’s Bear Rinehart, where she confronts her personal fears by writing about the scariest night of her life—the night the EF-4 tornado hit her neighborhood. Holcomb recalls the sounds of neighbors helping neighbors in the wake of tragedy the next day. That experience is written into C A N Y O N.

“I hope this record sounds like community flooding into a neighborhood to rebuild after a tornado and the excitement that maybe we can be a part of that rebuilding and restoring process by showing up both broken and beloved,” she offers. “In some ways, the deeper the pain, the more powerful the healing. The darker the night, the brighter the light shines. The wider the canyon of ache that splits our hearts in two, the more space for LOVE to move in and fill up what’s been emptied out, to bind up our broken hearts and remind us that suffering never gets the final word, even though it shapes us.”

Ellie Holcomb is a Dove-award winning songwriter, an author, and a top ten charting artist whose work has been shedding light int…